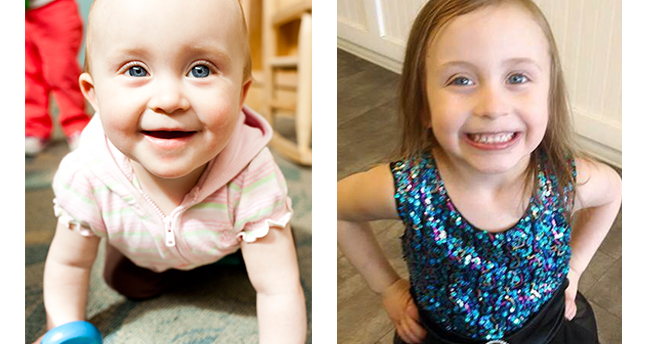 Growing up with Educare

“Ellie is very excited to go to ‘big girl’ school in the fall. She wants to ride the bus, meet her teachers and make new friends,” Damron said. He added, “Educare has allowed Ellie to learn that school is a place that serves multiple purposes: learning, fun, play, making friends and meeting new people. She looks at school as a safe and positive place.”

Damron said that attending Educare has prepared Ellie for kindergarten by helping her to be a “well-rounded kiddo” and that she now feels confident while being social and interacting with others.

Three of Damron’s five children have attended Educare. While their children are in school, Damron and his wife work full-time. Damron also enrolled in college to earn his emergency medical technician certification.

“They are extremely excited to go to Educare every day,” Damron said. “They tell us about the songs that they sing. They come home and want to read books.”

Damron said that when Ellie was a baby and he was looking for a quality early learning school for her, he didn’t hesitate to enroll her in Educare when he found out it was a Head Start program. Damron also attended a Head Start program as a child and now realizes it helped prepare him for school and life.

“Although I didn’t understand the impact when I was a child as much, when I look back, I realize that Head Start provided important building blocks that are essential for everyone’s life,” Damron said. “For example: positive interactions, social awareness, learning, creativity and understanding that teachers as well as other leaders in their life are there to provide additional help when needed.”

Five years later, Damron now credits Educare not only with helping prepare Ellie for kindergarten but also with creating an inviting culture for children and families.