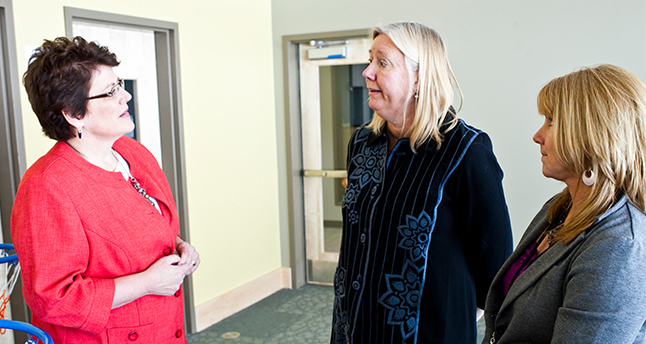 Kathy Colfer, executive director of Educare Central Maine, says her goal for policy change is to reach a point where society understands the importance of high-quality early learning and parents are calling for it.

“The ultimate “ah-ha” for me is when we have elevated early care and education, and the quality piece, to the point where parents demand it. Because when parents demand it and constituents are bringing it up to their legislators, that’s the way you move it and sustain it,” Colfer says.

To work toward this goal of transforming early learning policy, on September 6, Educare Central Maine hosted a first-ever Maine Children’s Convention organized by the Maine Children’s Alliance(MCA)—and kicked off an ongoing early childhood advocacy campaign. The convention, supported by the Bingham Program and the Buffett Early Childhood Fund, brought together around 100 children’s advocates to rally support for policies that improve outcomes for Maine’s children and families, such as by:

The conference also launched the creation of a coalition of more than 20 organizations, including Educare Central Maine, brought together by a common goal of wanting to improve early childhood education in Maine.

The group is driven by their manifesto, the Platform for Maine’s Children, which offers a vision for how the coalition and others can work together to help close the gap between what children need for their health and well-being, and what is being done to ensure they receive it.

“It is critical for us to move the platform forward so that we are all speaking with the same voice,” Colfer says. “It’s all about quality. We’re really the high-quality voice, showing what it takes to change the trajectory for children.”

The school’s involvement in policy efforts offers a tangible example of what a high-quality early childhood program looks like. For example, Educare Central Maine and MCA have invited local legislators to tour the school and get a glimpse of early learning in action.

“It was just clear how impressed they were and what a difference it made in terms of policy,” says
Rita Furlow, senior policy analyst at MCA. Furlow says tours like this can be a rare opportunity for policymakers to ask questions and learn more about early learning. In addition to building awareness among legislators, the group is also working to involve more Maine residents in advocacy efforts.

“Our goal is to get more people involved on a grassroots level, so when we have a crucial vote, we have people to reach out to build support,” Furlow says. “We are trying to get a mix of people from across the state. And, I have been especially excited and interested in how we can reach out and involve more parents.”