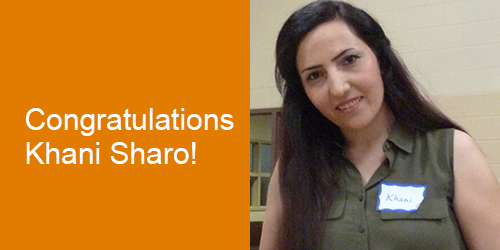 Educare Lincoln parent Khani Sharo is a testimonial to the fact that not only do children learn and grow at Educare, families do, too.

Sharo’s story is one of determination. She is a Yazidi refugee from Iraq and during her early years, she was denied a formal education.

She was introduced to Educare when she enrolled her now 3-year-old daughter. She says her daughter is happy at Educare and learns so many things.

Sharo is also learning at Educare.

Together, Sharo and her husband, Naif, participated in classes. They embraced the opportunity to learn on computers when the chance was offered to them. Sharo finished the class by accomplishing two years of progress in only four months.

Sharo said she learned a lot and enjoyed the time she spent in class. She even had perfect attendance, except for one day when her child was sick.

Sharo also embraced the full experience of the Family Literacy classes by attending every field trip offered along with every extracurricular activity.

To recognize Sharo’s accomplishments she was awarded Lincoln’s 2018 Mayor’s Award for Language and Literacy Achievement.

“I could not believe I received this award. It gave me a really warm feeling,” Sharo said.

Sharo now has high hopes for her daughter and for herself.

“We want to support her so she has a good future,” Sharo said of her goals for her daughter.

For herself, she hopes “to go to school. I want to learn English so I can help my family.”