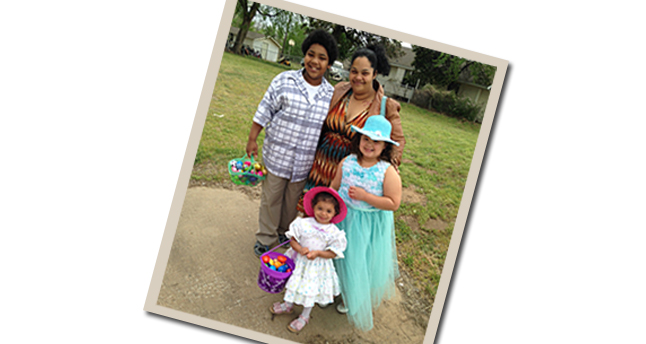 Kasondra Gunnells isn’t hesitant to tell you that Educare Tulsa has been a boon not just for her children but for herself as well. Gunnells enrolled her daughter Kaylee as a toddler and her daughter Zoe as soon as she was old enough to attend the state-of-the-art early childhood school.

Gunnells continues to marvel at the strides her daughters are making, crediting Educare with playing asignificant role.

“(Zoe) wants to tell you what colors the birds are,” Gunnells says of her youngest daughter now 2 years old. “She’s a singer; she likes to sing. And not just the first verse or a line but the full song. She likes to tell you about her day. It’s really good for a 2-year-old, for sure.” At Educare Tulsa, the teachers were patient in working with Kaylee, who is left handed. She’d write everything backwards, Gunnells explains.

Educare helped her daughter with writing her name and knowing her letters. When Kaylee, now 6 and in first grade, would write backwards, “they didn’t make her feel weird or anything…They just redirected her and showed her what order the letters go in.” The school also helped Kaylee build good relationships with her peers, Gunnells adds.

Kaylee got to the point where not only was she saying ‘hello’ to her classmates but their parents, too. That meant a lot, Gunnells points out, since Kaylee is the shyest of her three children. Educare had given Kaylee confidence and built up her self-esteem. Zoe mimics everything her siblings do, so it helps that Roylee, her 12-year-old brother, likes to read and that Gunnells, who has worked as many as three jobs at the same time, makes time to read to her children and listen to their reading. Zoe is able to decode pictures—predict what’s going to happen in a book based on the illustrations.

“I know it’s all due to Educare, to her being involved in the program,” Gunnells says.

The success that the Educare experience has brought to the Gunnells household isn’t limited to the children. A key feature of the Educare model is its family support services, which helped Gunnells earn her GED.

Once critical of herself for having unsuccessfully taken the test multiple times, Gunnells said her family support specialist connected her with a GED prep course that coached her on the areas she would need to focus on: math and English. Gunnells says she wasn’t completely confident in herself when it came to the prospect of taking the test yet again. But the course instructor really motivated her and so did her desire to do well for her family.

“I wanted it for my kids. I wanted it for myself.” When the results finally arrived, Gunnells recalled telling her instructor, “There’s no way that I passed. You better look at that again.”

Only she and one other student in her class had passed. Gunnells had done it all on her own. Now Gunnells aspires to do even more. She’s taking classes at Tulsa Community College in English and writing, working on an associate’s degree and looking toward the future. Business and accounting are an interest, Gunnells says.

“It’s huge for me because it’s math-oriented. Math is overwhelming to me, and it’s like facing a big fear for me. So that confidence that Educare has helped me come across and take with me and hold onto has made me really, really strong… I want to pursue something that a part of me says is out of my reach orout of my league but another part of me says that I’m going to do it, and nobody’s going to stop me. “I strive for my kids.”