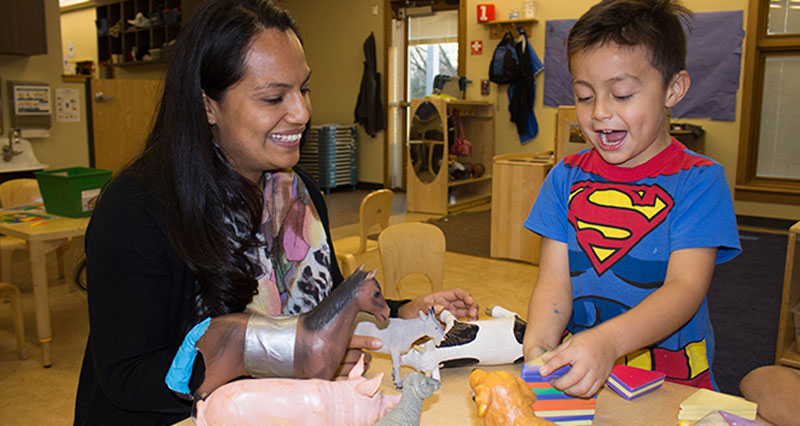 Rosalba Rodriguez and her husband initially had a difficult time trying to find someone to watch their 2-year-old son, Jairo Reyes. They tried to rearrange schedules and take time off from their jobs, but it wasn’t working.

Then they learned that Educare West DuPage was opening in their community and applied right away.

“As soon as I learned about Educare, and that it was a Head Start program, too, it caught my attention and I started to do research to see how I could get my child into the program,” Rodriguez says.

In addition to a place where Jairo would be well cared for during the day, Rodriguez was looking for a place where her son, who has difficulties with speech and sensory processing, would receive needed support.

“I was very concerned because with his sensory issues, he needs a lot of routines. If something is out of routine, it is hard for him to transition,” Rodriguez says.

At Educare, his teachers were supportive of his needs and regularly communicated with his therapists and parents to make sure they were all working together to help Jairo by using the same approaches at home and at school. For example, when Jairo was upset, they instituted a calming time and encouraged him to use his words instead of acting out physically.

Rodriguez says she’s very happy with how Jairo’s teachers worked and communicated with her and was also lucky to have her family support specialist, whom she could, and still can, turn to with any questions.

Jairo is now 5 and entered kindergarten this fall. Rodriguez describes him as “a very active boy” and “a kid who loves to explore.”

“Jairo is very happy in kindergarten, and things are better than what I expected,” Rodriguez says. “He loves school and is learning so much thanks to all the help and support he received at Educare!”

Educare also encouraged the family to create goals, which they are continuing to achieve. Rodriguez and her husband, who also have a 13-year-old daughter, met their goal of buying a house this year. Her husband is also attending GED courses and attending school to learn construction work. Rodriguez, who is currently a teacher’s assistant at a local school, signed up to take college courses starting in January and is going to be the community representative for Educare’s policy committee.

“I am very thankful that this place exists because it has helped me to educate my children and helped us with our lives,” Rodriguez says.