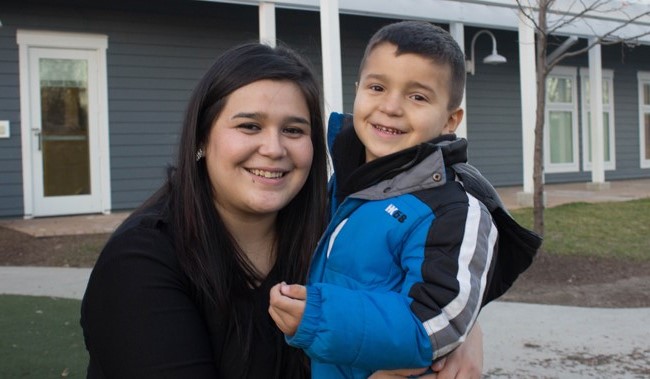 As Monica Guzman plays with her 5-year-old son, Jamez, on the Educare West DuPage playground, his classmates flock toward him ready to play. “Look at all the friends he has!” Guzman beams. Guzman is especially proud because Jamez used to have difficulty making friends. She says Jamez has grown a lot thanks to Educare—and she has, too.

When Guzman was a young mother starting college, she had to rely on neighbors to watch Jamez, then 1 year old. When she enrolled her son in Educare, she didn’t fully understand how the school could transform both of their lives.

“I’ve changed a lot since then. I wasn’t very involved in his life in the early years,” Guzman says. “Educare has really changed my life and my son’s life because he wouldn’t be where he is without the help they gave me and him.”

When Jamez started attending the school, his teachers were concerned about his developmental growth. “He wasn’t talking. He would say two or three words,” Guzman says. “But I didn’t see that because I was a young mom. I didn’t really know what it meant.”

But Monique Lopez, a family engagement supervisor at Educare, sat down with Guzman and gently encouraged her to have Jamez screened for developmental delays. After the screening, Jamez received speech and developmental therapies at Educare. Now Monica can see the great leaps that Jamez has made academically, developmentally and socially.

“Wow, it’s just amazing how much he has learned and how he has grown into this 5-year-old that I look at and still can’t believe he’s my son,” Guzman says. “I was always afraid that I wouldn’t be able to sit down and have conversations with him. So now when I do, I get all teary, because it’s happening.”

Guzman can also see a great change in herself. She is now a teacher aide in an infant room at Educare West DuPage. She has almost completed her Child Development Associate (CDA) Credential, so she can be promoted to an teacher assistant at Educare. She also plans to go back to school and possibly major in children’s psychology.

“Educare has really opened up my life for me,” Guzman says. “If it wasn’t for them, I wouldn’t be pursuing my CDA. I wouldn’t be thinking about going to a four-year college.” Lopez is proud of Guzman for the positive changes she’s made in her family. “She’s learned a lot and really matured,” Lopez says. “She’s learned to speak up for herself and for Jamez. It’s really good to see not only for her but for her son.”