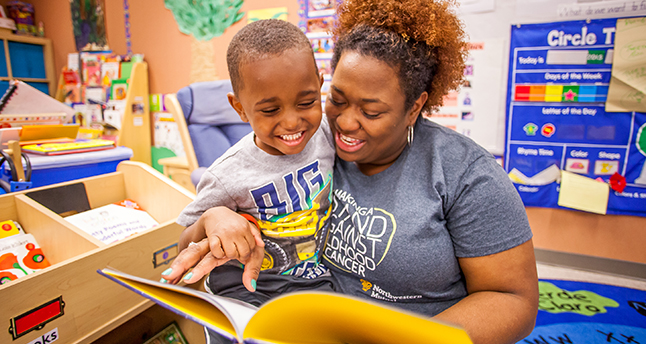 Parent sees Educare with the eyes of a teacher

When Darrian Davis was looking for an early learning program for her almost 2-year-old son, Jace, she used her experience as a former preschool teacher to help her choose the right one.

That search lead her to Educare Milwaukee.

Touring the facility and talking to the staff helped seal her decision. She wanted somewhere where the programming is up-to-date and where there is a structure, “so you can see what the children are actually doing when you go into the classroom,” Davis says.

Educare Milwaukee was a good fit for both Davis and Jace.

“He loves to come to school,” Davis says. “He loves being able to see his friends, but not only his friends, he loves to see his teachers, which is a great thing. As a teacher, I know that whether a kid likes a teacher or not has the ability to impact how much they learn from that teacher.”

Davis says that Jace has also grown a lot socially and academically. One of her goals for him when he was 3 years old was to learn his letters and phonetics. And within a month, he went from knowing a few to several, “which is really good for a 3-year-old,” Davis says.

Davis has also benefited from Educare. The teachers and staff have given her support and advice as she transitioned from teaching and returned to school to study business management. She also credits Educare for inspiring her to be more community-minded, which led to her goal of owning her own business that focuses on community education.

“The teachers and the staff have been very supportive, and just encouraging me, asking me how school’s going and making sure I’m doing everything I supposed to be doing,” Davis says. “The encouragement is very great.”

In addition to staying connected with Educare staff, Davis also volunteers at the school and attends events. She knows that communication and involvement with the school is not only good for her, it benefits Jace as well.

“The goal is to continue to always be a volunteer with whatever school he is at and have an open line of communication with the teacher,” Davis says. “I know from a statistics standpoint that when parents are more involved in their children’s education, children succeed. The importance in being a parent is making sure you do what you’re supposed to do so your child succeeds.”