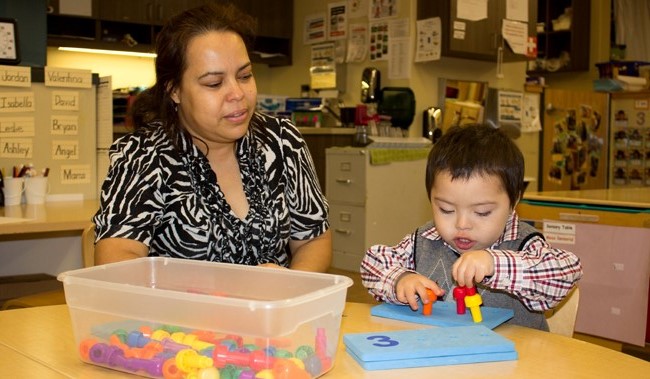 Working as a team for children

When Olivia Lopez and husband Julio Cesar Ramirez learned about a high-quality early childhood school being built in West Chicago, they knew it would be a great fit for their two young children. They were one of the first families to apply for and enroll at Educare West DuPage.

“The best thing I could have ever done for my children is put them in Educare,” Lopez says. Lopez said she previously relied on babysitters to care for her children while she and her husband worked. She knew that Educare would be better, especially for her son Cesar, 3, who has Down syndrome.

Educare teachers have partnered with Lopez to help Cesar meet his developmental milestones in the two years he’s attended the school. He has learned to walk and use sign language to communicate. Educare takes an interdisciplinary approach to serving children, with teachers and family support staff working together with parents. With Cesar, this team extends to the staff at the school district program where he receives speech, occupational and developmental therapy.

“We’re all a team and we work together to meet Cesar’s needs,” Lopez says. Lopez’s daughter, also named Olivia, attended Educare and is now in kindergarten. Olivia was shy and timid at first, but at Educare she blossomed into a smart, outgoing girl. “Being here helped Olivia get ready for kindergarten and know what to anticipate when she got there,” Lopez says.

Lisette Arcos, a family support specialist at the school, says Lopez has made great strides as a parent. With the encouragement of Arcos, Lopez has accomplished personal goals, such as taking classes in English and buying a car, and served as a member of the parent policy council. Lopez says at Educare she has learned how to speak up for her children and make sure they have the support they need at school.

“Educare is the best thing that ever happened to my family,” Lopez says. “The staff are angels in disguise. They work so well with me that I wouldn’t change them for anything in the world.”